We had the fortunate opportunity to talk with the head engineer and the superintendent for a very big and extremely important cross continental project; the upgrade of the railways to allow for bullet trains to pass through Bulgaria.  The current rail paths only allow for speeds of 130 kilometers per hour and with the upgrades, the rails will allow for speeds up to 200 kilometers per hour.  They have a significant portion already done and during testing, the train was able to reach 220 kilometers per hour and could have gone faster but they ran out of track!  One of the main reasons that trains were unable to achieve speeds faster than 130 kilometers per hour was due to the radius of curvature of the rails.  But there were other upgrades that needed to be completed to accommodate the faster trains like electrical work, conduits, etc.  As aforementioned, this is a cross continental project with the goals to link Europe to the Middle East and eventually all the way to China following the path of the Silk Road.  However, the European Union’s involvement stops at the Turkish border.  One interesting thing that they did was allow for companies to purchase conduit to sell to allow better and faster data transfer between the Middle East and Europe.  So this project is not solely about trains, they have found a way to bring in money as well!

Phase I of this project was to update one set of tracks in 4 sections of 20 kilometer rail through automatically removing the old rail and preassembling the new rail before automatically placing that.  They placed the preassembled rail in 25 meter increments.  Once they finished the first track, they switched all the trains to the new rail and began Phase II.  Phase II is updating the second set of tracks as well as widening any sections if needed, diverting storm water, building any new pedestrian or traffic overhead bridges, culverts, adding walls for safety and noise control, and updating all the station buildings which includes making them handicap accessible.  They have completed Phase I and are working one Phase II currently. 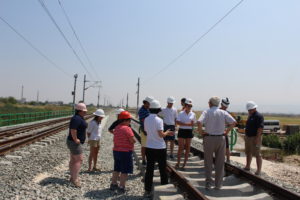 To remove and update the rail the process is as follows: remove old stone prism until undisturbed earth is reached, remove secondary construction such as drainage, widen the path if needed, prepare the bed and lay the new stone prism, place the new rail and provide an insulation with a concrete base with wire mesh to ensure that no water penetrates.  Removal of the tracks also includes overhead electric and posts.  The stone prism is as follows: a 0-32 millimeter diameter stone fraction layer on top of the undisturbed earth, then a 50 centimeter thick layer of 32-63 millimeter diameter gray stone, and then rail is placed and finally a 20 centimeter thick layer of 32-63 millimeter diameter layer is used to fill in the area.

Since the European Union is involved and paying for a fraction of the cost of the new rail way, many of the safety and quality control measures are very strict.  It is required of all projects in this area to have technical oversight meetings twice a month to ensure all requirements are being met and to approve each section before they move onto the next section.  There is also a design team meeting once a month that involves the engineers coming to the site.  But perhaps the most fascinating part was the strict regulations on materials.  Samples of all materials must be obtained and the on-site materials are checked for quality and correctness multiple times throughout the project.  Every company that is providing materials for this project must prepare the materials that will actually be sent to the rail project (not just stockpiled materials) and someone is sent to the manufacturers/ producers and check to make sure the materials are right and of good quality.  This stands even of the manufacturers are in another country and even if the project needs two more rail pieces, that means someone has to travel to Italy to check those two rail pieces before they can be shipped here and places.  In doing it this way, they actually find that they spend less money than if they receive a shipment and it is not right and they have to send it back and wait for the right one.  There is a small advanced payment however, 100% of the payment comes when 100% of the bedding is laid, 100% of rail is placed, etc.  They will not pay until every material is done and tested to satisfaction.

In addition they have some advanced safety precautions such as trains using the updated Phase I rail way must reduce their speeds to 60 kilometers per hour along the length of the four sections and even further reduce their speed when entering where the crews are actually working for that day.  There are safety instruction meetings every morning and the crews must sign in however there is no drug or alcohol testing here.

We also visited one of the quarries that supplies part of the stone fraction bedding for the project.  They mainly source limestone but are converting the facility to other stones as limestone is becoming obsolete.  They produce about 1 million tons per year but they only excavate on a request/ client/ order basis.  They do however work year round.  The stone comes in four European standard sizes: 0-4 mm which is used for stucco, 4-11 mm which is used in asphalt, 11-22 mm which is used in the base layer of asphalt and large stone which is used for decorative purposes in walls. 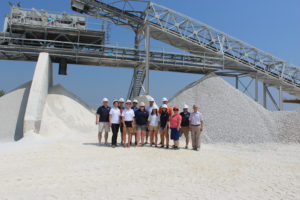 This project was easily one of my favorites (so far) because I have traveled on the bullet trains in Europe and absolutely love them.  I think that the Europeans do a fantastic job with their train systems and would love to see the US adopt a similar system!